Almost weekly, I will be mistaken by someone who swears that they know me. This has been going on for many years, and I’ve become used to it. I enjoy the surprised look on people’s faces, and then joking with them, “Well, there are a lot of short bald white guys around.” For those who have never seen me in person, I’m unremarkable looking, though once an elderly group of Japanese tourists thought I might be Bruce Willis. People are always more receptive to what’s familiar, and in those wonderful moments when I forget that I am separate and different from everyone else, the world reminds me that I may be on to something. 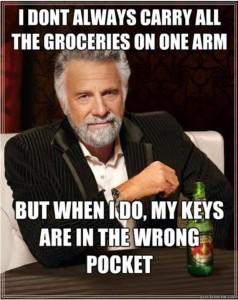 One result of being with people in a way that doesn’t recognize distinctions, is that they often welcome you as one of their own. I’m not taking about being magnanimous or charitable, but genuinely sharing the inside joke on what it means to be human. It’s not trying to identify with others. The minute you try, you’re already dealing with people from a point of otherness. Sentiments like, “We’re all God’s children” strike me as sanctimonious, and seem driven by a vague moral superiority and sense of Christian pity for those who are less fortunate, ignorant or who have ‘lost their way’. Literary clichés like, “We’re not so different, you and I” are based on the premise that there is a distinct you and I in which one can find commonality, but never resolve the reality of separateness.

For a long time, I would pride myself on my critical mind, or what my family and friends would call “being a wise-ass”. After all, our brain is a big difference engine, wired to resolve mismatches between what it has learned and what it perceives. Our whole western educational system builds on this, from the early game of “Which of these things is not like the other?” to Compare and Contrast. Humor is nothing more than pointing out how what we expected was different from what happened. It has only taken me 46 years to discover that, in the words of Teddy Roosevelt, “It is not the critic who counts”.

When we’re busy thinking, analyzing and judging, the booby prize is validation of why things persist. This doesn’t change the system in which we operate, it just more accurately defines its parameters. When we turn off the critical mind, we make room for true insight to occur and are free to ignore the boundaries between what is and what is possible. Like Einstein struggling for years trying to reconcile two seemingly contradictory theories about space and time. The answer came to him while riding a street car and seeing the clock tower in Bern, which led him to the theory of special relativity, where time changes depending on how fast you’re moving. There are many similar stories of how great minds came to revolutionary conclusions while at leisure or at least, not trying to think too much.

While my brainpower is above average at best, it’s when my mind is quiet that I find myself in touch with the beauty of the ordinary and best positioned to connect with people. I used to joke that this was my Jedi Mind Trick, but I’ve realized that it has everything to do with not trying to use my mind and that it isn’t a trick at all; it’s the art of being with people without clinging to an agenda.

An early example of when I first became aware of this was in the Bangkok Airport about 10 years ago while meeting up with my Australian partner Mark, with whom I had been remotely collaborating on a week-long leadership program for a corporate client. When we met at baggage claim, we got our things and began looking for the driver with our names on the pickup card. We spotted him and as we approached, the driver stepped forward to take my bags, but not Mark’s.
“Interesting that he took both your bags and not one of mine,” Mark noted.
“That’s because he’s my brother,” I said cheerfully.”
“You know this guy? He’s driven you before?”
“No,” I admitted. First time.” Mark was surprised because in Asia, as he pointed out, seniority commands respect and Mark was clearly older than I was, not to mention better dressed, taller (arguably better looking) and had first waved to the driver outside baggage claim. The driver should have assumed that Mark was my boss or at least the Alpha.
“How did you manage to get him to take your bags, then?”
“Because you’re looking at him as a service provider and I’m being his brother.” Mark was amused by this.
“So this is your NLP technique?” I thought about it, but didn’t have an immediate answer. It wasn’t anything I had practiced or prepared for the moment. I didn’t have to get into character, psych myself up or fake anything. Mark is an astute observer of behavior, and his noticing the situation really got me thinking about how it happened.

The act of getting someone to carry my bags was such a small payoff that I couldn’t possibly have thought about it ahead of time. It’s not like preparing for a big job interview or sales meeting, where people will practice and perfect a pitch, deliberately using all the personal charm at their disposal to influence the decision makers.

Perhaps the difference here was that I wasn’t expecting the driver to do something for me and without that agenda, I was free to relate to him as someone I was happy to see, which he reflected back to me by taking my bags.

In restaurants, another environment that I refer to as low-consequence, I find that the way I am being also helps me get what I want. By this I mean that I don’t have to frequently get the staff’s attention because they will be more aware of me than even a bigger party who represent a bigger tip. I use restaurants as an example, because my wife and I eat out a lot, and because I don’t work closely with other people on a daily basis, it’s my most frequent interface with people outside my immediate family. A restaurant, like most service interactions (transportation, customer support, retail) is low-consequence in that it is a basic transaction where your future isn’t really impacted by its outcome. It’s cynical and manipulative to be a “brother” to the driver so that he would carry my bags, or to be the cheerful ‘friend’ who would love a refill on his ice tea. There are successful ways of being that aren’t calculating and don’t consider results in their honest expression.

What if you were able to treat every interaction as low-consequence; without fear of failure, rejection or being judged, and just let your humanity speak for itself? You’d likely find a new level of relatedness where you more easily get what you want.

Most people are distracted by daily concerns and treat transactions as just that: transactions. Companies train people to smile and greet customers and pretend to be interested in their situation, but this is part of a selling technique. The acquisition and application of key skills are essential in successful outcomes, but without an authenticity of relatedness, the effectiveness of skills are limited.

While success (ie; enjoying the process of achieving meaningful, self-owned goals), requires us to define what’s at stake, it’s the situations that seemingly don’t count that come to define our success in life. I have told the story many times to client groups about a date I had with a girl who was all sweetness to my face, but then was a bitch to our waitress, and how that was enough of an indication to me that my date was someone who didn’t understand the significance of being her best self regardless of circumstance.

Once I was accompanying President Clinton’s press team in China and when he had a free moment after a speech, he came directly up to me as I stood in a group at the side of the cordon and started a conversation. This really impressed the Chinese minders who asked me how I knew him. I said I didn’t know him, I was just treating him like a regular guy.
“But you can’t just casually chat with a powerful leader like that,” they admonished.
“No,” I said. “You can’t”. The distinction was lost on them, but I still remember that in the moment with Clinton, while everyone around me was jockeying for a photo with him, I didn’t even take out my camera; I was completely focused on being there.

My aspiration is to be deliberate in my relatedness, instead of occasionally forgetting that I have an agenda. With this comes an awareness of not being manipulative or an attachment to any specific outcomes. It means a way of being with people that doesn’t require ‘turning on the charm’ or working an angle, no matter how high the stakes. In the words of Landmark Education, it requires giving up my ‘winning formula’ and being with people in an authentic way that opens up delightful new possibilities.